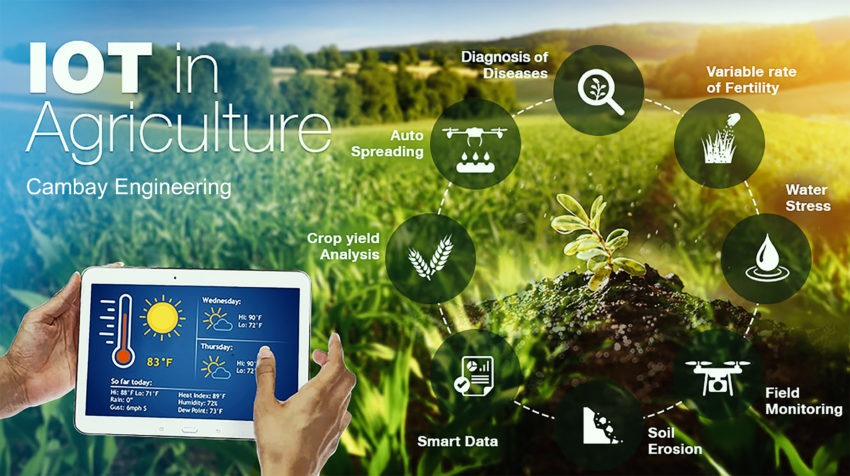 Unlike most industries currently benefiting from the Internet of Things (IoT), agriculture provides a rare window into understanding how a symbiotic relationship between nature and emerging technology can be nurtured. Today, hundreds of farms and animal husbandry business owners are integrating 3D printing, smart edge devices, augmented reality, and IoT to define the future of farming while closing the gap between demand and the supply of agricultural products.

These smart farming ventures have begun to prove successful and the approximately 75 million IoT devices deployed across the agricultural industry have led to an increase in produce yield of 9% within the community. But the challenge of meeting the ever-growing global demand for agricultural produce remains, and this forms the basis for exploring how IoT intends to shape the future of farming.

Shaping the future of commercial farming

Although mechanized farming has greatly increased the yield of farms, diverse challenges such as food waste, erosion of topsoil, and a disconnected public negatively affect production levels. The United Nations state that one-third of the world’s food goes to waste, and wastage during agricultural production is a major cause despite mechanization. These areas are where IoT can be applied to shape the future of farming in the following ways:

The captured information can then be deployed in diverse ways such as enhancing nurturing activities and determining harvest periods, thus creating a farming ecosystem where yield is at its optimal while also reducing waste.

The ability to track the condition of mechanized equipment and deploy predictive maintenance services is one way IoT has helped medium and large-scale farmers reduce cost. With vibration sensors, motion sensors, and smart edge technology many features of farming equipment can be monitored. This data can then be used to determine maintenance cycles or deliver real-time maintenance that reduces equipment downtime and harvest or production delays.

IoT can also reduce operational costs and recurrent expenditure in different ways. An example of how this has been applied is the case of Californian Avocado farmer, Kurt Bantle, who tracked the water requirements for his farm with IoT devices. His application of IoT highlighted when water was needed as well as the required volume. Before integrating IoT, his annual plant watering bill was approximately $47,000. With the use of soil sensors to determine watering cycles and volume, Kurt Bantle ended up shaving approximately $35,000 off his farm’s water bills.

This is where IoT and other interrelated technologies can help. The integration of smart devices such as drones, robots, and smart edge technologies within agricultural settings could get young people interested in farming. IoT and the devices powering it are viewed as hip and this can be used to both attract and teach young individuals the business of farming. Here, captured IoT data can be used to design virtual environments and digital twin ecosystems to teach, monitor, and manage large agricultural facilities.

The US Department of Agriculture expects STEM-related activities to drive agriculture in the future and this will account for 30% of agricultural job openings. Thus, the integration of IoT could attract young students to consider filling these positions and replenishing the agriculture industry’s depleted ranks.

Shaping the future of subsistence farming with IoT

Within the developing and developed world, subsistence farming still exists as many farmers produce items they can eat or sell for capital. Although these farmers may not be able to invest heavily in research and development, the integration of IoT can drive the future of farming for small-scale farmers in diverse ways.

This also applies to precision farming. The data or information driven by the application of IoT can be shared as a service to subsistence farmers. Thus, farmers can use this information to decide when to effectively apply scarce resources such as fertilizers during farming cycles.

Streamlining the future of farming with IoT

IoT and interrelated emerging technologies are positioned to help with managing labor costs, increasing farming yields, and bringing control to agricultural efforts. To achieve these benefits, the infrastructure needed to handle the data sets and analysis behind IoT must be designed and securely set up. This is where Cambay Engineering can help both small and large-scale agricultural facilities achieve their IoT goals. If you are interested in talking about agriculture tech, smart farms, and IoT applications, simply contact us today to speak with an experienced engineer.